Riboflavin Transporter Deficiency (RTD) is a debilitating, life-shortening, neurodegenerative genetic disorder. Formerly known as Brown-Vialetto-Van Laere (BVVL) or Fazio-Londe (FL) syndrome, an estimated one in 1 million people worldwide are born with RTD, which means a child with RTD is potentially born every few days.  Approximately 50% of individuals with RTD develop symptoms before 3 years of age, with 95% developing symptoms under the age of 20.

First reported in 1894 as an “infantile” form of ALS, RTD affects motor and sensory nerve cells (neurons), taking away a person’s ability to hear, see, move, walk, eat and breathe.  Despite the physically devastating effects of the disease, the mental capabilities of people with RTD remain completely intact.

Damage to the Nervous System

RTD is characterized by a loss of certain nerve cells in the spinal cord and brainstem called motor and sensory neurons.  The region of the brainstem most affected in RTD is known as the pontobulbar region, which contains both motor and sensory neurons often referred to as cranial neurons.  Motor neurons affected in RTD receive nerve impulses from the brain and transmit these impulses to the muscles via the nerves. The loss of motor neurons in RTD leads to progressive weakness and wasting (atrophy) in muscles, including those muscles used for movement, breathing, and swallowing. Sensory neurons are nerve cells responsible for converting external stimuli, such as sound, sight, touch and the position of limbs, into useful information. Sensory neurons receive this “information” from the sensory organ (e.g. ears, eyes) and transmit this information to the brain.  The loss of sensory neurons in RTD can lead to issues including hearing loss, vision loss and gait ataxia (unbalanced walking). 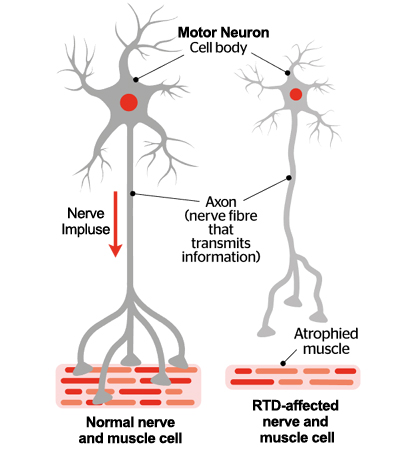 Prior to the onset of symptoms, individuals with RTD have normal development. An infection or fever often precipitate the initial onset of symptoms. If left untreated, RTD results in a progressive decline that is fatal in over 50% of individuals, with death from respiratory insufficiency occurring within 10 years of the onset of symptoms. The exact symptoms, age of onset, severity, and rate of progression are highly variable, even among siblings.  In general, later-onset disease often follows a slower course.  In very rare cases, individuals with milder presentations of RTD may have normal lifespans.

About Riboflavin (Vitamin B2)

Riboflavin is an essential water-soluble vitamin and the precursor of the active coenzymes flavin mononucleotide (FMN) and flavin adenine dinucleotide (FAD).  FMN and FAD are important cofactors in a wide number of different metabolic processes, including carbohydrate, amino acid, and lipid metabolism.  Humans are unable to synthesize riboflavin in the body, and thus it has to be absorbed from the diet via riboflavin transporters or, to a lesser extent, from production by the intestinal microflora.  Defective riboflavin transport as a result of mutations in the riboflavin transporters causes decreased intracellular levels of riboflavin, FAD and FMN.  It is this intracellular decrease in FAD and FMN levels that are now thought to play a primary role in RTD disease progression.

RTD is inherited in an autosomal recessive manner, meaning that individuals with RTD have two mutated (abnormal) copies of either the SLC52A2 or SLC52A3 gene, although other genetic forms of RTD potentially exist.  Both biological parents must be a carrier of one mutated gene (allele) for a child to be affected.  The large majority of people with only one mutated SLC52A2 or SLC52A3 gene (called “carriers”) do not show any symptoms of RTD (see Carrier section).

These recent genetic discoveries have led to the discovery of high-dose riboflavin (vitamin B2) as a potentially life-saving treatment for RTD patients. Although the exact pathophysiology of RTD is unclear, there is now overwhelming clinical evidence that daily high-dose riboflavin supplementation can ameliorate (“make better”) the progression in both RTD Type 2 and Type 3, particularly when initiated soon after the onset of symptoms.

Given riboflavin is potentially lifesaving and may prevent irreversible neurological damage, riboflavin treatment should be commenced as soon as RTD is suspected and continued lifelong unless the diagnosis is excluded by molecular genetic testing. Some patients who have symptoms of RTD but who have been genetically disproved to have RTD have also been noted to improve on riboflavin treatment.

The optimal dosing of oral riboflavin is unknown, and it has been prescribed in dosing ranging from 10 to 80 mg/kilogram bodyweight/day divided into 2, 3 or 4 doses (or 600mg to 2700mg daily total for adults).  In addition to riboflavin, many patients have been prescribed additional antioxidant and cellular support supplements, including coenzyme Q10 (ubiquinone or ubiquinol form), L-carnitine, vitamins C & E, and lipoic acid.  Although some patients have reported additional improvements with the addition of these supplements, there are no longitudinal data on the outcome of these combinations, and more research is required.

Riboflavin is a treatment but not a cure for RTD.

Although some individuals with RTD have shown dramatic and prolonged improvement with riboflavin treatment alone, others have sadly shown some signs of continued neurological deterioration after starting riboflavin treatment, albeit at a much slower rate of decline compared to pre-treatment.  The optimal riboflavin dosing size, frequency, type and method of delivery remain unknown across different patients and RTD types. More research is desperately needed to optimize current riboflavin treatment and to develop complementary novel therapeutic strategies.

RTD is a progressive neurological disorder characterized by motor, sensory and cranial neuropathy.  Although there are many overlaps in the clinical features of RTD Types 2 and 3, they both have distinct phenotypes (observable sets of characteristics), which is likely the result of the distinctive expression patterns of the RFVT-2 and RFVT-3 transporters across various tissues in the body.

The age of onset of symptoms, interval of time between symptoms, and severity and rate of progression of symptoms are highly variable in RTD, even among siblings or those sharing identical SLC52 gene mutations.

The course of untreated RTD is highly unpredictable.  Symptoms can occur simultaneously and progress rapidly, or there can be months or years between symptoms, with slow progression and periods of stability.  RTD can manifest itself anytime between birth and mid-30s, although onset is most often in early childhood (see Signs & Symptoms section for more details on age of presentation).

Below is a brief summary of common clinical features of RTD when untreated over an extended period:

Symptoms more common in RTD Type 2 than Type 3 include:

Deep tendon reflexes are consistently absent in RTD Type 2 but can be absent, brisk or normal in RTD Type 3.

The mental capabilities of people with RTD remain completely intact.

Other features of RTD may include:

For more detailed information on clinical signs and symptoms, including presenting symptoms:

The spectrum of symptoms in RTD is unknown.  The majority of patients diagnosed since 2010 have had a severe disease presentation at a young age.  There may well exist a larger cohort of individuals with a milder phenotype of RTD (e.g. only hearing or vision loss), who might benefit greatly from early riboflavin treatment.

The diagnosis of RTD is based on a combination of clinical symptoms, laboratory findings, neuroimaging, neurophysiological testing as well as the identification of biallelic pathogenic variants in either SLC52A2 or SLC52A3 on molecular genetic testing.

Although RTD has long been considered an extremely rare condition, it appears RTD is more prevalent than previously thought, given the advent of molecular genetic testing which has improved diagnostic capabilities.

The carrier frequency of known RTD pathogenic mutations suggests ~1 in 1 million individuals are born with RTD, based on the autosomal recessive pattern of inheritance.  An estimated 1 in 500 individuals are a carriers of a RTD pathogenic mutations.  Based on the number of individuals screened for pathogenic variants in SLC52A2 and SLC52A3, Holden (2015) estimated 70 new diagnoses of RTD worldwide per year. Based on patients identified to date, RTD Type 2 appears to be the most common form of RTD.

There are currently far fewer individuals diagnosed with RTD than the predicted frequency rate would suggest.  Between 2010 and 2019 there have only been 214 individual with genetically confirmed RTD reported in the literature or to the Cure RTD Registry.  Such differences between the expected and reported numbers of cases suggest that a large number of individuals with RTD are being mismanaged and not receiving potentially life-saving treatment due to a failure to correctly diagnose the condition.

The ratio of females to males in the Cure RTD Registry and published literature with RTD Type 2 and Type 3 is 59% (n=90) and 55% (n=124) respectively.  Although it has been theorized by some authors that there is a more severe and lethal presentation in males, the current evidence based on progression and survival rate in known RTD cases does not yet support those speculations.

The underlying pathophysiological mechanism of this neuropathy or neuronopathy remains to be discovered.  The Cure RTD Foundation supports research that will improve the quality and length of life for those diagnosed with RTD, and will lead to treatments that eliminate its symptoms. 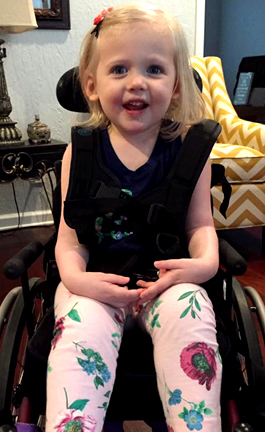