In data obtained from the Cure RTD Foundation International Registry, and those obtained from published literature, a brain MRI was noted for 69 patients (55 RTD Type 2 and 14 RTD Type 3).

In general the brain MRI was found to be normal with abnormalities of unknown significant being reported in only 5 of 55 (9%) RTD Type 2 patients.  Abnormalities observed included mild atrophy of the optic chiasm and anterior superior cerebellar vermis.

MRI images of the spine have rarely been reported in genetically confirmed RTD cases.  One individual with RTD Type 2 (Woodcock et al. 2017) and one individual with RTD Type 3 (Spagnoli et al. 2012) have been reported with T2 hyperintensity and diffusion tensor imaging signal abnormalities in the dorsal columns of the spinal cord.  These signal abnormalities were hypothesized to reflect active degeneration of sensory pathways in these children as they were imaged during a period of rapid sensorimotor decline.  In addition, Woodcock and colleagues (2017) provided the first report of contrast enhancement of the ventral nerve roots of the cauda equine, suggesting a process affecting predominantly anterior horn cells in a child with RTD Type 2. 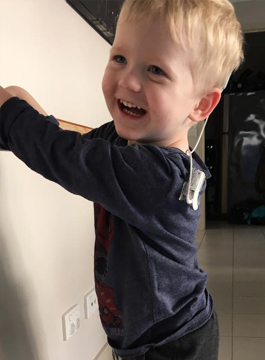